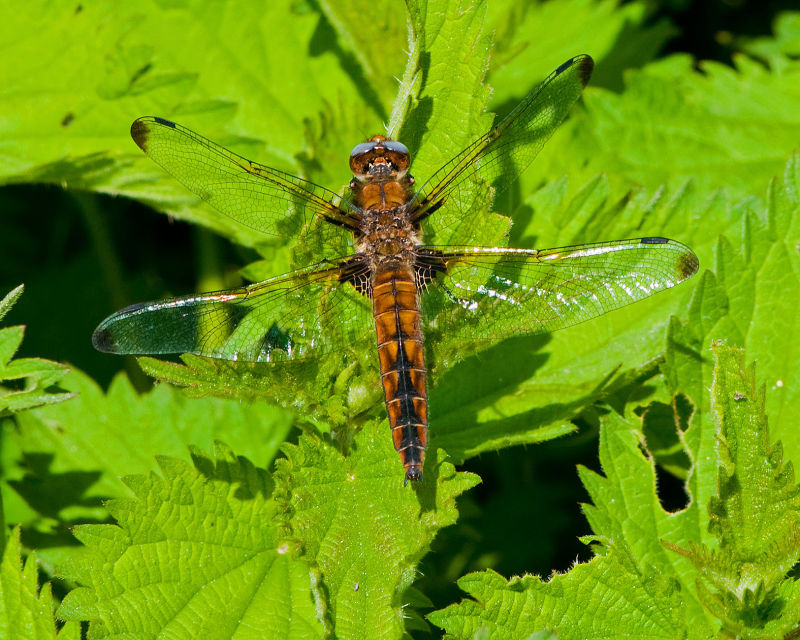 female scarce chaser
Essay on dragonflys found in Dorset
10/06/2012
Once hatched from their eggs the nymphs are voracious and carnivorous, being a very fast swimming predator. They can eject water from their rear like a jet propulsion system! Escape from this is futile.

Being aquatic, it is odd that they think nothing of a quick foray out of the water to feed on land as well. Favoured menu of these fearsome predators include mosquito larvae (excellent choice, sir!), worms, small fish and tadpoles.

After what can be several years underwater, they crawl up rocks, weeds, bulrushes etc and begin to shed their skin, emerging with wings. Once airborne, the domination of insects continues as a hybrid, flying, killing machine with massive eyes containing 30,000 individual lenses, legs that form a flying cage to catch its prey and aerobatic skills which make it look like child’s play to scoop up gnats, bees, mayflies, butterflies and any other unfortunate insect in its path! Out-flying all, like a turbo charged harrier jump jet, they can eat their own weight in bugs in just 30 minutes. Imagine a prehistoric one with up to a metre wingspan!!!

Prehistoric – 300 million years have been patrolling over wetlands. Two independent sets of wings that can beat up to 30 times a second – quite slow compared to other insects. Multiple lenses in their huge eyes to spot prey from a distance with ease. Colourful, glorious, magnificent – an insect which appears as summer begins. Their short life span is preceded by years as a predatory and violent nymph, terrifying smaller aquatic prey.

Dorset is home to several species of dragon and damselfly. Some, such as the banded demoiselle are prolific, whilst others are not so common or easy to find. All are a challenge to photograph, the challenge equal to the pleasure of a successful shot! Hovering, darting, chasing, flying backwards and rapid direction changes are easy, even for a juvenile specimen.