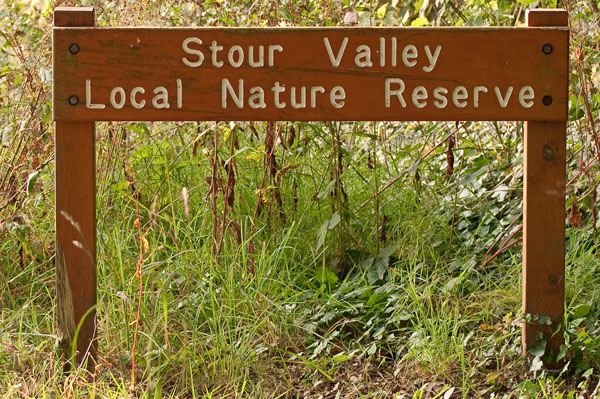 I love my surroundings – the beaches of Bournemouth, the Stour Valley and the New Forest are all within minutes, the New Forest being the farthest away at approximately half an hour’s travel – and I consider myself really fortunate to live in such a wonderfully diverse area.

Mark and I both work full time, so the opportunities for spending time taking photos are limited. Making the most of evenings and very early mornings is of prime importance as they are probably some of the most crucial times to capture wildlife images, not only because of the lighting, but also the lack of outside influences! We spend a lot of time down at the River Stour because it’s only a five minute car journey away.

On our latest excursion to the River Stour, Mark and I ventured into a meadow full of wild flowers – corn marigolds, poppies, wild mustard, cornflowers (to name but a few) and a species I hadn’t noticed before, marsh woundwort – a plant of about 18” high with tiny purple flowers, orchid-like in their appearance. The insects were literally having a field day. The corn marigolds were alive with butterflies, bees and hoverflies, who were making the most of the summer sunshine (it having been a little bit scarce since May). Crickets and grasshoppers leapt out from underfoot with every step, and life was evident everywhere. Incidentally, crickets are distinguishable from grasshoppers in that they have long, fairly delicate looking antennae and grasshoppers, typically, have shorter and generally stubbier ones.

Walking along the river bank, we checked on the progress of the swans and their cygnets. There are several swan families between the bridge at New Road and The Mill at Throop and Mark has been photographing one particular family since they appeared with the newly hatched cygnets early in June. Recently, one parent and one cygnet appear to be missing from the family – the remaining adult keeping protective watch over the youngsters.

A stroll along the hedgerows reveals butterflies who love the bramble flowers, particularly the comma, red admiral and gatekeeper. The peacock and brown argus (beautifully marked on the underside of the wings) seem to prefer thistle and teasel. We’ve also seen orange tips, small tortoiseshell, skippers and veined whites. It’s good to know so many species appear to be thriving in this wonderful habitat. It’s also a bonus that the blackberries have ripened so early this year, especially for so many of the berry feeding birds, not to mention the apple and blackberry crumble eating species who are a bit partial to some of nature’s goodies! (Tip – on an outing in which the photography is of prime importance to your other half, always take a couple of hunter/gatherer bags which at least gives you something to do whilst the sometimes lengthy photographic processes are taking place!)


The months of July and August have also given us the opportunity to witness the dragonfly nymphs emerging from the river and slowly climbing up the reeds to make that transition into one of the most beautiful and powerful examples of flying insects I have ever seen. Their ability as an airborne predator is truly impressive, and their elegance enchanting. The sunlight on their streamlined and iridescent bodies, highlighting the blue, green, red and gold, is breathtakingly beautiful. Hawkers, broad bodied chasers, demoiselles, emperor and golden-ringed dragonfly are all commonly seen.

Probably one of the most rewarding sights is that of a kingfisher flying low along the river at incredible speed, and that flash of brilliant turquoise blue for a few seconds is pure magic. Once you get to know their favourite fishing perches, it’s amazing to watch them dive and reappear within seconds with a small fish. They usually stun the fish by beating its head on a branch, and then swallow it whole, headfirst.

Probably the most intensely exciting moment on the river over the last couple of years was when we spotted two otters, at dusk, on the far bank of the river. One was eating a fish, the other rolling in the water in that graceful way that only otters seem to possess. Beautiful to witness, but not nearly enough light to capture the moment on camera. Better just to watch quietly and enjoy!

Heron, egret, moorhen and coot are also frequently seen, although harder to spot recently with the prolific growth of reeds (however this does at least provide them with good protective cover, especially if they have young). We’ve occasionally seen water rail, which are not usually easy to come across unless you happen to know the particular stretch of the river that they frequent. Reed warblers can be heard, but usually only glimpsed, in the dense reed beds. Their grating, chattering song is amazingly loud for such a little bird! There is an abundance of small bird life in the area, in particular goldfinch, greenfinch, bullfinch, great tit, blue tit, long tailed tit, robin and wren to name the most commonly seen. The hedgerows are absolutely alive with them at the moment. On a recent stroll, we watched a nuthatch gathering mud from a puddle on the riverside path (they use the mud to reduce the diameter of the entrance to their nest inside a tree hole).

After a very enjoyable few hours down by the river early last Sunday morning, having had most of the area and the wildlife to ourselves for a few hours, we decided to call it a day and head for home (armed with a large bag of blackberries for the crumble, and many photos to go through!), and leave the dog walkers, fishermen, joggers and families to enjoy their particular space for the rest of the day.

Every season has something to offer in the Stour Valley, but these summer months provide the colour and vibrancy that I’ll remember through the cold, dark days of winter, knowing that it will all come full circle, and that what I will witness in the summer of 2012 will be the next generation of the species. Nature is truly amazing, so get out there and appreciate it for what it is- absolutely wonderful!
Next
Previous