Otters on the Stour 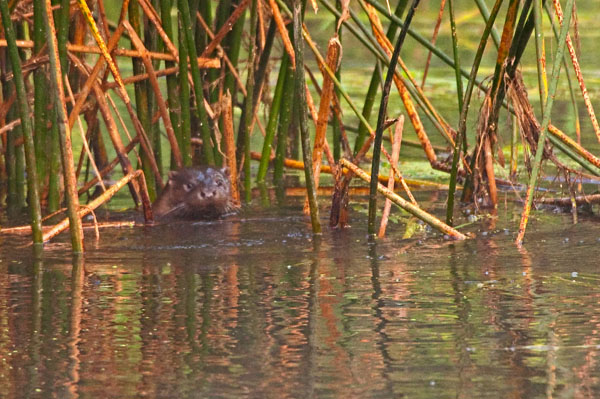 At about six in the morning a mist hung over the fields on the northern banks of the River Stour, and on the river itself. There was hardly a soul about (not surprisingly!) and everything was very peaceful. Walking quietly along the riverbank, watching the day slowly unfold, I heard a splash and saw the ripples in the water. I stopped and quietly waited, hoping my instinct was right on what this might turn out to be, and lo and behold it was, because a beautifully streamlined body rolled over in the water and surfaced with a fish – an Otter, a creature superbly adapted for his amphibious lifestyle and a pure joy to see in the wild. He fished near the far bank for about twenty minutes, every so often coming up with his catch and making short work of despatching it. The light was poor and good images hard to capture, but I did my best! All the while kingfishers sped up and down the river on their early morning missions and they would normally command most of my attention, but they took third place on the rostrum today, the winner being the River Stour, second place to the otter and a gallant third to the kingfisher. The river will always be victorious, because without it there would be no contenders.

Another wonderful visit to the Stour Valley, which never disappoints, and sustains so much precious wildlife for all of us to appreciate.
Next
Previous